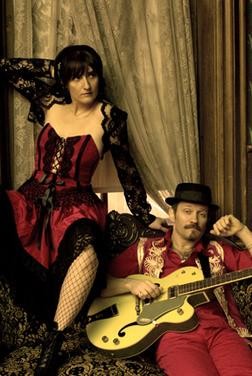 The Hudson Valley’s first couple of steampunk, better known as Frenchy and the Punk, seem to be eternally whooping it up on the Ren-faire/coffeehouse circuit with their bemusing brand of cabaret folk. This month, the New Paltz duo takes the hoopla to the big stage in the Big Apple when they open for Abney Park at Irving Plaza.

Formerly known as the Gypsy Nomads, the twosome features French-born singer and percussionist Samantha Stephenson and guitarist and percussionist Scott Helland. Obviously, it’s Stephenson who makes up the “Frenchy” end of the act’s moniker. Helland holds down the “Punk” appellation, in spades—in the 1980s, he was the bassist in pioneering Western Massachusetts, hardcore bands the Outpatients and Deep Wound (the latter also featured J Mascis of Dinosaur Jr. and Lou Barlow of Dinosaur Jr. and Sebadoh). The band recently released its ninth album, Bonjour Batfrog, on its own E.A. Recordings label.

Here’s a clip of the band being interviewed and performing at the AnachroCon festival in 2013:

Frenchy and the Punk will perform at Irving Plaza in New York on September 25 at 8pm. For more information, visit http://www.frenchyandthepunk.com/.