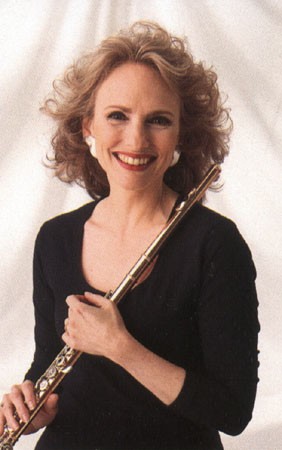 Each fall since 1982 Clarion Concerts in Columbia County has been presenting its world-class Leaf Peeper Concerts chamber music series, making it the county’s longest-running chamber music series. The organization recently named internationally acclaimed flutist Eugenia Zukerman as its next music director, and she’ll be introduced to attendees with a concert when the 2014 series begins this month.

In demand worldwide as an orchestral soloist, chamber musician, and recitalist, Zukerman, who on September 13 will play music by Mozart, Bach, and Tania Leon, has been praised by the New York Times for her performances: “Her musicianship is consummate, her taste immaculate and her stage presence a sheer pleasure.” She has enjoyed collaborations with Emmanuel Ax, Yo-Yo Ma, Jean-Yves Thibaudet, the Shanghai String Quartet, and fellow flutists Jean-Pierre Rampal and James Galway, and has performed as soloist with the Tokyo Philharmonic, the Royal Philharmonic, the China Philharmonic, and the Israel, Moscow, Prague, and Scottish chamber orchestras.

Here, she delivers a bit of Bach with pianist Anthony Newman:


Clarion Concerts in Columbia County’s 2014 Leaf Peeper Concert series begins with concert by Eugenia Zukerman at the Hillsdale Grange in Hillsdale, New York, at 7:30pm. Tickets are $25. For the complete series listing and more information, call (518) 329-5613 or visit www.leafpeeperconcerts.org.