Beyond the Tent at the Hudson Valley Shakespeare Festival | Daily Dose

Beyond the Tent at the Hudson Valley Shakespeare Festival 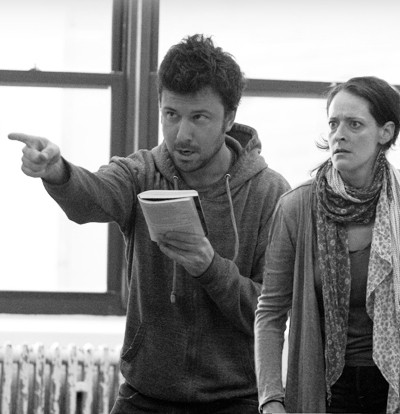 The Hudson Valley Shakespeare Festival is a beloved annual event, offering performances of some of the Bard’s greatest works in its open-air theater tent on the river. This year in its 28th season and celebrating the playwright’s 450th birthday, the festival has programmed “A Midsummer Night’s Dream,” “Othello,” “The Two Gentlemen of Verona,” and David Ives’s “The Liar.” But in addition to mainstage works, organizers makes a priority of showcasing some new plays in process.

HVSF2—formerly In Process—was added to the festival in 2011. It’s a small series of new plays read in a lab setting, giving audience members the opportunity to see how pieces are workshopped before being put onstage. This year, the program consists of four adaptations and original works for stage.

“Sense and Sensibility” is Kate Hamill’s new adaptation of the Jane Austen novel about two sisters, Marianne and Elinor, who are left to discover love, flirtation, and heartbreak with no dowries. It’s a story of prudence, unwavering passion, and the search for a balance of the two. The play will open the series on Friday, August 8 at 7pm.

Kenneth Cavander presents his modern transcription of Shakespeare’s “Timon of Athens,” the cautionary tale of a too-generous aristocrat, on Thursday, August 14 at 7pm.

Catch the reading of Michael Laurence’s new original play, “Hamlet in Bed,” on Thursday, August 16 at 7pm. The play’s main character is Michael, an actor whose two greatest desires are to play the part of Hamlet and to find his birth mother.

The series will close with “Dog in the Manger,” David Johnston’s adaptation of the play by Lope de Vega. The Spanish Golden Age drama defies its society’s classism with a story of forbidden love between a countess and her secretary. Friday, August 22 at 7pm.

All HVSF2 tickets are $25 and available for purchase online, and all readings will be held at the Philipstown Depot Theatre in Garrison.