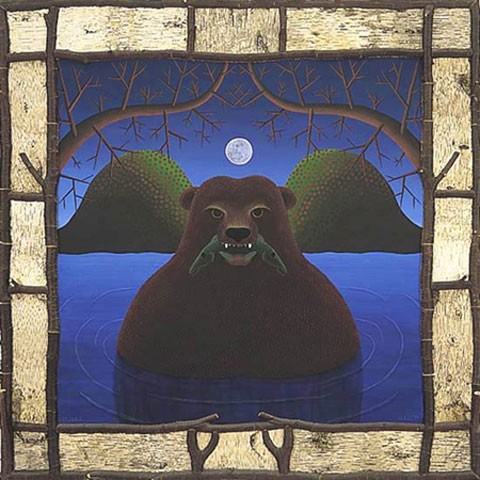 We read the signs all over the country: blue and yellow markers of local historic figures and events, familiar tour guides we’ve learned to trust and appreciate when we travel. But if you’ve ever traveled along Interstate 75 between Michigan and Florida, you may have found yourself asking, “Is this one real?”

You could be standing before a sign that reads, “On this site stood Matt Lucash, a Christian for whom preventing gay marriage is more important than feeding the poor.” The sign is just one in a series, titled “The I-75 Project,” by artist Norm Magnusson. Magnusson’s signs, whose familiarity prompts tourists to stop for factual tidbits of information, highlight systemic ironies or critique social complacency and are all, decidedly, political. They are supposed to confuse you—“I love this confusion,” claims the artist on his website, “and hope to slip a message in while people are mulling it over.”

Magnusson enjoys working within the realm of symbolism; he explores political and environmental themes in his series “Animal Allegories.” In one painting, “The Imposition of Order Upon Nature,” a bear stares at its audience with a fish in its mouth. The nearly perfect symmetry of the painting—the two hills in the background, the ripples of water around the bear, and even the fish’s two heads—is oddly juxtaposed with what should be a natural scene and represents humans’ attempts to control nature in the name of aesthetics. He has also created a “decorating nature” series, painting with watercolor on found objects like dried leaves, rocks, and shells and then photographing them. One piece, “in autumn, some leaves use color bars to get everything perfect,” was featured on the cover of our November 2011 issue.

Norm Magnusson will speak on “The Descent into the Political” at the Kleinert/James Center in Woodstock on Friday, July 11 at 6:30pm. The talk is free and will be an opportunity to hear about Magnusson’s evolution from painting to creating public works with political messages. (845) 679-2079.