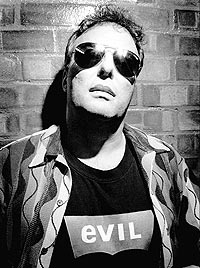 I still haven’t forgotten hearing the Dead Kennedys’ “California Űber Alles” in late 1979, on the late-night punk/new wave show of Seton Hall University radio station WSOU. It was my freshman year of high school and my punk-curious crew and I had heard whispers about the band—we were in sniggering disbelief at the sheer gall of the name. But where to hear them? Naturally, the big FM stations that we knew best weren’t, to be mild, playing much serious punk rock. And they definitely weren’t about to enrage or disgust their listeners and sponsors with music by a band called the Dead Kennedys. College radio, though, was one musical revelation after another. And on that night into my stealthy headphones WSOU’s DJ announced the tune.

With nervous anticipation, I listened as the foreboding bass built and the psycho-noir guitar lines opened the door for Biafra’s warbling, strangulated voice to enter. The lyrics were both insurgent and hilarious: a scathing satire of a nightmarish, enforced-smiley-face, hippie-fascist state administered by “the Suede-Denim Secret Police” and imposed with “organic poison gas.” Brilliant…

Take a spin, if you dare: