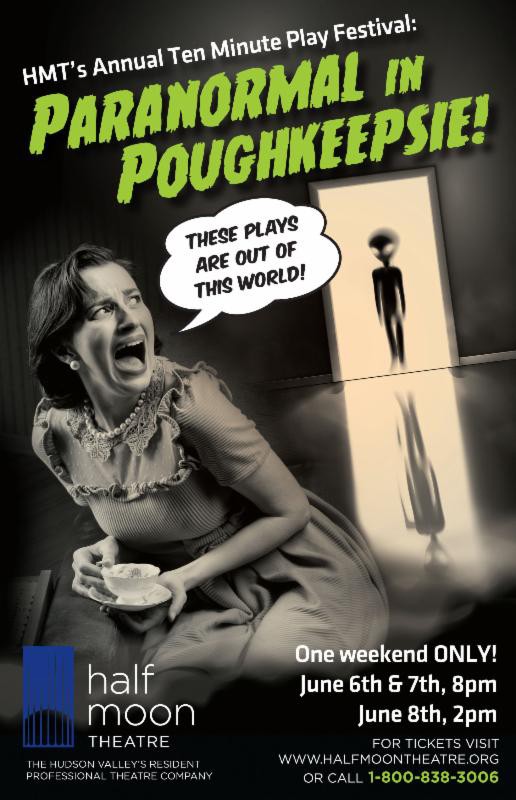 Half Moon Theatre, a professional theater company in the Hudson Valley, is closing its 2013-2014 performance season with the fourth annual Ten-Minute Play Festival: Paranormal in Poughkeepsie. First introduced in the company’s 2010-2011 season, the festival features a series of short plays written and directed by Hudson Valley-based members and friends of Half Moon Theatre. This year’s festival offers an “out of this world” program of supernatural plays all set in familiar Dutchess County locations—a giant insect finding love at Pine Plains’ Tower Pizza and a séance at the Omega Institute in Rhinebeck, to name a few.

The festival is also a playful nod to the Hudson Valley’s own association with paranormal activity; the region is reported to be home to some of the country’s most frequent UFO sightings, as well as close to 100 registered paranormal societies.

Half Moon Theatre’s festival is a one-weekend event, with performances on Friday, June 6 and Saturday, June 7 at 8pm and on Sunday, June 8 at 2pm. Tickets are $20 and can be booked on the web or at (800) 838-3006. All performances will be held at HMT’s Black Box Theatre in the North Oakwood Commons Building, 2515 South Road, Poughkeepsie.