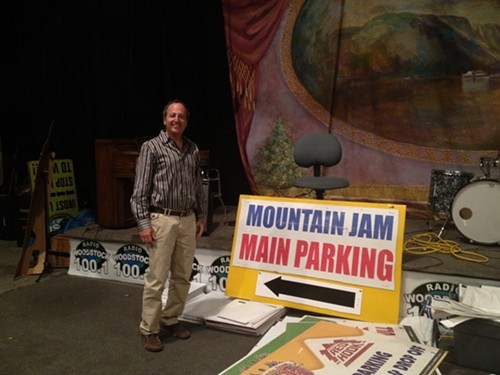 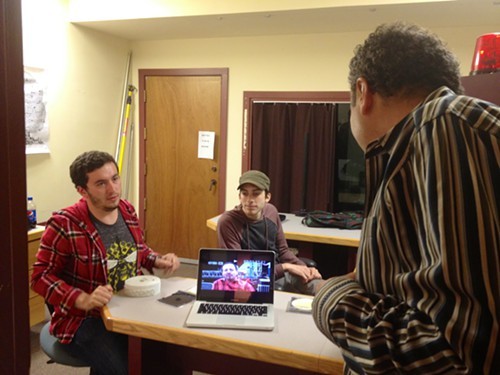 I visited the Radio Woodstock studio last week to interview Gary Chetkof, organizer of Mountain Jam on the celebratory Tenth Annual Mountain Jam Music Festival at Hunter Mountain. It is crunch time. The studio is buzzing with phone calls, staffers stopping Gary to get his approval on things, and parking signs all over the Utopia studio, but Gary appears calm and happy.

Chetkof conceived the idea of Mountain Jam when Radio Woodstock turned 25, and he wanted to throw a one-day concert to celebrate the milestone. He looked at different locations and Hunter Mountain seemed perfect. Back in 2004 about 3300 people came to see 4 bands perform at Hunter Mountain. “I sort of remember when it was over. So many people came up it to me and said you should do this next year. It just evolved spontaneous. It was never like let’s do a big music festival,” says Chetkof.

This year there will be 40 bands, and 15,000 people per day during the 4-day event. The Allman Brothers Band are the big buzz because they are breaking up after 45 years, and plus the festival was named after their great song Mountain Jam. Chetkof is especially excited about The Tedeschi Trucks Band, The Avett Brothers, Damian Marley, and Chris Robinson from the Black Crows. (For the full line up and schedule visit MountainJam.com).

He works with singer/guitarist Warren Hanes of Gov’t Mule to select the line up for Mountain Jam. “We try to mix and match, the old favorites with the new cutting edge bands so that there is something for everyone. The big thing about Mountain Jam is we go for the real serious musicians, people who can improvise too,” says Chetkof.

There are improvements this year—better camping options, better RV options, VIP perks. “It’s grown to a different level, and it’s exciting to see it all come together. It’s also the most exciting line up we’ve ever had. We’re having a fireworks celebration on Saturday night. There will be collaboration happening between different bands. There’s spontaneity…a band will say, ‘Hey, I see you are playing today, let’s rehearse this song in the dressing room for half an hour,” adds Chetkof. While there are other bands that are planning collaborations ahead of time. (He wouldn’t divulge which bands were already talking).

What is the most important thing for a new Mountain Jam concert go-er to know? “”Come to have a really good time. You’ll meet all kinds of people, people in their 60s, younger people, a really diverse group comes. Be prepared for how you’re going to dress. You can get all four seasons in one day at Hunter Mountain,” advises Chetkof.

I asked him if he had any predictions for the 20th year? He laughed. “I just hope it’s still around. I couldn’t even phathom what the 20th year is going to look like.” The planning is all consuming, and he describes Mountain Jam as “the best and the worst 4 days of my life” as he juggles socializing with people, schmoozing with the bands, and communicating with his team on the ground. “It happens 20 hours a day for 4 straight days. It’s exhilaration, this thing you imagined is happening. That’s why I can’t sleep. I don’t want to miss anything,” says Chetkof. You won’t want to miss it either. Get more information and tickets at MountainJam.com.

Follow Vanessa Ahern's blog, Hudson Valley Good Stuff for more of where to eat, play, and recharge your spirit in the Hudson Valley.