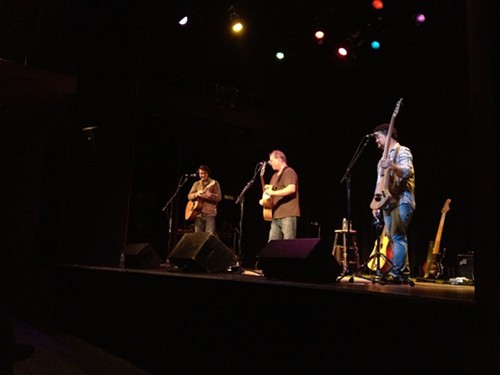 On Saturday night Shawn Mullins started out by telling the Woodstock audience that he loves playing at Bearsville Theater because all the wood high beams “soak up the tone” and he also loves to hang out in Woodstock. I’ve been a fan of his since his hit song “Lullabye” so I was looking forward to hearing him live. Young songwriter Max Gomez from Taos, New Mexico, who recently teamed up with Mullins to write music, opened up for Mullins. I really liked his song “Never Say Never” about new love and old love. Gomez sang a beautiful song called “Tall Buildings” (written by John Hartford). I think I loved this song the most, maybe because there was a cute story about the reason why Gomez includes it in his set list. It is an old song (He was performing at a venue where a wedding was taking place and saw a 7-year-old boy dressed in a suit from head to toe. “I over-heard his Dad tell him, ‘Son, get used to that suit because one day you’ll be wearing one everyday to go to work,”said Gomez. At first Gomez thought it was a cute remark, but then after pondering it a bit longer, he thought otherwise.

Shawn Mullins sang about a dozen songs, including the sultry “Light You Up” from his new album and “Lullabye” and “What a Beautiful Wreck” and a tribute to Levon Helm. Mullins likened performing at The Ramble to a religious experience.

Did you know he wrote half of “Lullabye” in a Chinese restaurant in Hollywood, and the second half in the back of his friend’s pick up truck? Hope you enjoy these few videos from the concert. If you get a chance to see Shawn Mullins and Max Gomez perform in your town, don’t miss them! They really put on a good show. The audience gave a half-hearted request for an encore, but they didn’t do an encore. Later I thought about how much Mullins was perspiring at the end of the show, and feel like when an artist really gives it their all, the best that they have, an encore isn’t really necessary, in my opinion.