The Battle of Pussy Willow Creek 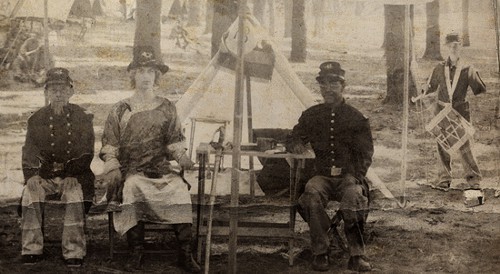 With television programs like "The Office" taking the limelight and recent films like Mermaid: The Body Found and Megaladon: The Monster Shark Lives fooling audiences across the nation, the mockumentary has become a growing fad in cinematic production, or at least one recently recognized on a national scale. Generally coupled with satire and comedy, these films poke fun at the film's central topic of discussion and the essence of a documentary itself. These mockumentaries use camera angles, acting, and effects indicative of a believable documentary, and subsequently either fool or humor its audiences.

The Downing Film Center at the Newburgh Waterfront will host the Hudson Valley premier of Wendy Jo Cohen's civil war mockumentary The Battle of Pussy Willow Creek. As all good mockumentaries do, the Hudson Valley native's film captures an overbearing sense of satirical comedy, providing characters and plots so unrealistic that only the most naive of audiences would see anything besides fiction. The narrative explores a few characters—an opium addicted gay colonel, an elderly Chinese launderer, a nerdy escaped slave, and a one-armed teenage prostitute—who save the Union from a foreign plot, only to then be excluded from the history books as a result of intolerance. The film has been glorified by The New York Times, The Wall Street Journal, and the renowned documentary filmmaker Ken Burns who called the film "incredibly wonderful and funny."

Cohen has been an active film producer, working on eleven documentaries for Discovery Channel and History Channel. She has also assisted-directed many films, including Judy Berlin, starring Eddie Falco, and Manny and Lo, starring Scarlett Johansson. Furthermore, she has written and directed the award-winning short film Tom Luvs Maeve 4-Ever, which was shot in Hudson Valley's town of Fishkill.

The showing will begin at 1:30pm on Sunday, October 20th, and will be followed by a Q&A with Cohen. For more information, visit Pussywillowcreek.com. Watch the film's trailer on YouTube.