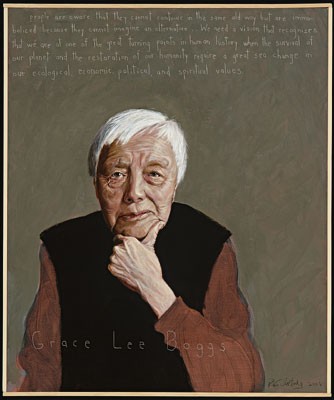 Grace Lee Boggs came upon activism by chance. She had received a PhD in philosophy from Bryn Mawr and was living on the South Side of Chicago, while working at the University of Chicago Philosophy Library. The neighborhood was overrun with rats, and a local group was protesting. Grace joined the group, and has been fighting all sorts of rats for the last 71 years. Grace began in the (Trotskyist) Workers Party, left that for the Johnson-Forest Tendency, then the Socialist Workers Party, then the Correspondence Publishing Committee, then a group called Facing Reality, then no group at all. In 1953 she moved to Detroit, and met African-American socialist Jimmy Boggs. The two married almost immediately, remaining together until his death in 1993.

Is it because she is Chinese that Grace seems so sagelike? She's sort of a Dalai Lama of the Left. "You have to change your attitude towards time," Grace explains. "I used to think in terms of decades; now I think in terms of centuries." She found a great truth in revolutionary communism, which she evolved into a new vision of nonviolence: a rigorous anti-capitalist program based on changing individuals. "The Left has typically overvalued activism and undervalued reflection," Grace says, gazing out at the lake in Maine where she often vacationed. Her evolution parallels that of Pete Seeger, our local 94-year-old hero.

American Revolutionary emphasizes the value of philosophical training for an activist. Grace recognizes when precise definition is necessary. We see her meeting with Danny Glover on the subject of educational reform. "Most people, when they discuss improving schools, they mean fitting in better to the white power structure," Grace asserts. Danny looks stunned. Before he leaves, she loads Danny down with six books: his "homework." In a sense, all of Grace's thinking emerges from her discovery of Hegel in 1932. She may be more faithful to the Dialectic than any woman who has ever lived.

Ideas have consequences, even the ideas of obscure Trotskyites in Detroit. Grace and Jimmy began seeing the revolutionary potential of African-American workers in the 1950s. "Black Power" affected millions of Americans — affects us still. In 1992, Grace founded Detroit Summer, a multicultural youth program, one of the first experiments in urban agriculture.

At the end of the film, Grace is 98, using a walker, but still lucid and indomitable. I wept.

In one sense, this is the most useful film I have ever seen.