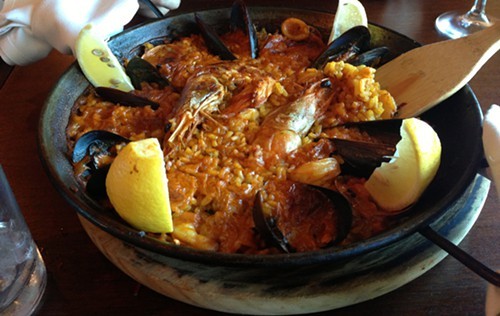 Last Sunday, Sala on Hudson invited me and my friend Rosemary, to taste a Spanish brunch. Their Paella was voted best Paella in Westchester by Westchester magazine in July, and I love Paella so I was very excited about checking this restaurant out. I even skipped breakfast! The restaurant that opened in November 2012 is a bit off the beaten path on 44 Maple Street in Croton-on-Hudson. The interior is very elegant and inviting with nice Spanish decor. We were greeted by Shahla, the manager when we arrived around 12:15pm.

The Valencia style Paella takes about 30 minutes to prepare so Shahla suggested that we start off with a few light tapas. I tried the datil and the tortilla espanol. Rosemary enjoyed the Mercado salad (mixed greens, cherry tomatoes with an almond vinaigrette). The dates were very decadent! Imagine a date stuffed with almonds, wrapped in bacon, and then fried. It was sweet salty heaven! They were really good! The tortilla espanol was tasty and light enough so that I had room for the Paella.

The seafood paella for two arrived 30 minutes later, triumphantly in served in a Paerella, the same pan that the dish is cooked in. Shala said that the burned part of the paella called the socorrat is considered a delicacy. We squeezed the lemon on it, and dug in! The way Shahla described it, the cooking process sounds very complicated—endless stirring, rotating the pan, boiling, steaming, and carmelizing the rice in an effort to create the perfect paella. The best part of the perfect paella is the burned bottom layer. I rarely get to eat Paella because I’m not brave enough to attempt to cook it myself, and this is only the second time I have enjoyed it since I moved to the Hudson Valley in 2003. Rosemary and I really enjoyed the Seafood Paella. (You can have the paella with chicken or they will even make it with only vegetables for the vegetarians). The rice was perfectly done, not mushy or too al dente. I loved the mussels, shrimp, and clams too. It had a rich savory taste to it. It was a very satisfying dish and fun to share! This meal will really fill you up! The service was very friendly, and I’d definitely return here if I’m in the area. They also have a sister restaurant in Manhattan called Sala on Nine at 35 West 19th Street.

We finished off this “serious brunch” as Rosemary called it, with coffee and flan. (If you are in the mood for a more decadent dessert, try the Churros con chocolate or Tarta Santiago). Sala on Hudson is a very cute Spanish restaurant, that is off the beaten path, but well worth the trip!

Follow Vanessa Ahern's blog Hudson Valley Good Stuff for where to eat, play & recharge your spirit in the Hudson Valley.