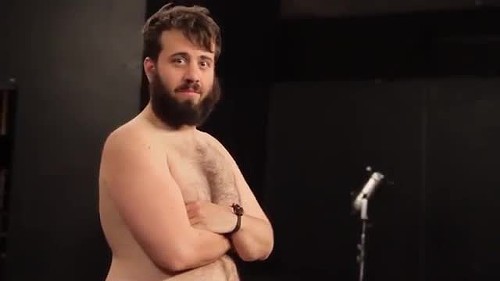 Eugene Olivier is a contemporary version of the Music Man, from the eponymous musical of 1957. He arrives in town — LA — with glowing (fake) credentials, to organize a thrilling musical event. But while Harold Hill exudes smooth reassurance, Eugene is a juvenile, pudgy, hysterical nut, walking out naked on the first day of rehearsals to "establish trust," flying into fits of rage when his ex-girlfriend (whom he hasn't seen for 10 years) is attracted to another man.

Eugene's goal: to make a musical about O.J. Simpson, based on the tragedy of Othello, which he sees as parallel to this tabloid melodrama. The obstacle: he has no money, except the small donations he can cadge off his best friend Lawrence. The two con a Christian theater troupe, located in a funeral parlor, into offering their space.

The musical itself — which arrives at the end of the movie — is stupidly brilliant, with Eugene himself as the villainous Mark Fuhrman (I had forgotten entirely about him!), planting evidence against our hero — red ribbons dropped on O.J.'s bedroom floor, representing bloodstains. Kato Kaelin makes a perfect musical comedy character, as does Judge Ito, played by a young Asian woman (Jessica Andres). The show contains an anthemic hit, "I'm Gonna Drive That Fucking Bronco Right Off the Road" and a rousing gospel song: "If the Glove Don't Fit, You Must Acquit!"

"Orenthal: The Musical" is a telling statement about racism. It reveals how verboten the O.J. Simpson case has become in public American life. We even stop ourselves from thinking about it, though O.J. was recently in the news, accused of stealing cookies from the cafeteria of his Nevada prison. Eugene is a Holy Innocent, unaware that blacks are a separate race. His best friend, Lawrence, is African-American, and a successful accountant, while Eugene sleeps in a "garage apartment," which is actually inside a garage.

I've never seen so many actors from a movie (four) attend a festival — and they came a day early! Though they don't use the word, they seem to be a collective. Their love of theater is the theme of the movie, and also IS the movie.