Genesis Chapman's Works as Meditations at One Mile Gallery 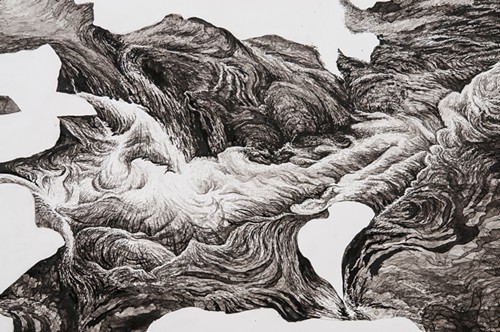 Genesis Chapman’s solo exhibition at One Mile Gallery in Kingston is a whirlpool of fine drawing. Large works and small pieces mounted on wood, ostensibly of a creek by his home in rural Virginia, they’ll pull you into their vortex of intricately laid marks, inked in black, penetrating eddies and lapping waves, burbling and churning in violent contrast to the intimate gallery space on hand and the beached land you’d figure is on the other side. I doubt if they’ll let you go anytime soon.

Chapman, a native Virginian, is exhibiting his new work, call them drawings or paintings: India ink as water offered darkly and in lightly touched, draped rivulets that dried up and left their carcass of a mark on yupo, a fantastic Japanese paper that I encourage you to take up as game and experiment the next time you fudge around with paper. Write on it, draw on it, make ink blot drawings on it and psychotherapize yourself into a better life.

I’ll tell you when I visited the gallery, I found and loved two large walls nearly covered over by two magnificent drawings; a third wall quietly flaunted smaller pieces that work as objects in their own rights, separate and separable from Chapman’s precise, immaculate narrative of that one lone water spot that apparently comes alive right by his home.

The work worked and works by association. It hooks onto the world at large by ranging riffs and hangs only by reference, what comes to mind: water, creek, river, time, yesterday’s never-return. And I promise you’ll get to all that only by gazing at the work. That’s fairly fruitful work, I’d think.

Chapman’s deft handling of the material language of his work, the landscape manufactured in ink, also demands attention, though you might not know that at first glance. The drawings of water are meditative. You can see both the energy and the effort of their making. Time inheres in these works. However, equally as interesting is what’s not there. The banks, the trees, the features of the coastline of his roaring and seeping waters are blank. The land is the negative space in which the positive, active water works; the land is both your point of discovery and departure. It’s land and history that’s not there.

Virginia, come and gone: it’s place as foundational for the American narrative and its myth. The history of the Scotch-Irish, its innervating and invigorating poverty and romanticized rurality; the entirety of John Denver’s discography, including his better, more sincere live performances, down to today’s contemporary politics that compares and contrasts with Jefferson’s self-denial and his self-inflicted wounds. You’ve got scandal in the governor’s mansion, invasive medical procedures, a government shutdown that no doubt affects Virginians in a way that might be difficult to fathom for most here at home. Virginia come and gone: what’s left behind is the past, not merely a story.

And suppose you leave all that side, still, best I can figure Chapman’s work brings to mind the Saturnine narratives we all whisper about, those we seek to medicate away. The sea, the lake, the creek. Young Adonis’ slow suicide by reflection; Home-hungry King Odysseus’s ten year journey back to Ithaca, the price he paid for killing wrathful Poseidon’s son. Life by the drop cuts cavernous swathes out of all we’ve all left behind. It drowns whatever future awaits discovery.

Now, I offer you these readings not because the work needs a different way of looking at it. I offer you these readings because the work, about a particular place and particular stories, invites them. Drawings are maps for a way of processing the world unencumbered by the exotic and painful delay of, say, oil paint. Drawings are immediate. They live with you just as you are. They are the concrete poetry to historical paintings’ epic narrative. And on yupo, a plastic paper, the marks laid down both live and die.

So, as a formal strategy of its own making, Chapman’s works are brilliantly executed. But, yes, formally successful, nevertheless the works as meditations work not because they are recollections and revisions of home. They work because they function more like the deliverance of water from Virginia carried over by hand across mountains to my home here in the Hudson Valley.