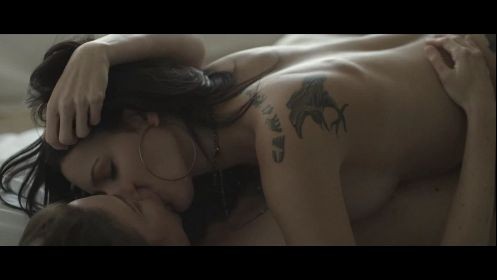 Abby is the mother of two small children: they look to be seven and nine. She lives in a spacious, clean, two-story American house on a plot of land with several small trees. Abby is on the PTA, and the board of her synagogue. She has a wife: a hard-working lawyer specializing in divorce, with the telling name Kate Abelman.

Meet the new suburban lesbian, completely accepted by her circle of chattering housewives, who speak incessantly about home redecoration. Abby is 42, and awkwardly pretty. At the beginning of the movie she receives a concussion in a playground accident. Thus begins her midlife crisis.

Abby and Kate have a sexless marriage. In one early scene, the couple is lying in bed. Kate begins to seduce Abby... and falls asleep.

Abby has found a loft in New York City that she is renovating, with the help of a young bearded carpenter, Justin. The two become friends, discussing their intimate lives. Justin finds Abby a high-priced lesbian call girl for a passionate afternoon. Afterwards, Justin reports, "She said you were good. She said maybe you should go into the business yourself." An irrepressible smile creeps over Abby's face.

Thus begins her new life as a lesbian hooker in New York, specializing in rich young girls. In her loft, decorated with posters of Louise Bourgeois and the Guerrilla Girls, Abby — who chooses the name Eleanor for her career — expresses her own passion, and receives the embraces of strangers. This is a "woman's movie" about sex, where lovemaking is a gift, not a conquest. Abby becomes a sort of self-taught therapist, using her body as a tool for reassurance.

Lesbian sex entails no biological commitment. No one can get pregnant, and change her life forever. It's perfect for brief encounters — except for the loneliness that results. Alternating the banality of suburban picnics and the crucible of naked sex, Abby is attenuated, rootless. Ultimately, she must make a decision...

First-time director Stacie Passion (who is also the writer) did a fine job. The performances are lucid and quick. She spoke to us after the movie, and was herself amazed that Concussion found a distributor. Today it opens in New York City.