Recap of the Chef Challenge at the Woodstock Farm Festival 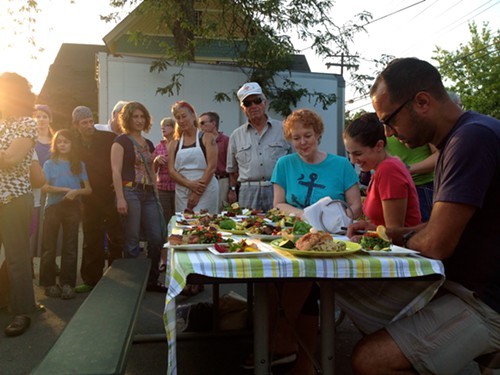 I found out about the Chef’s Challenge at the Woodstock Farm Festival at the last minute. Kathleen Reynolds from Edible Hudson Valley, who judged cupcakes with me at the Gardiner Cupcake Festival, was one of the lucky judges of the Chef’s Challenge and invited me to watch her in action again with two other judges. When I arrived around 6pm the scene was like one of those chef shows where the competitors are thrown into a camping setting and are scrambling to put the finishing touches on rustic dishes. There were 3 teams: Chef Curt Robair, executive chef at Menla Mountain Retreat, Chef Kiran Ramgotra-Sancious,, and Chef/consultant Ritchie Kim, all talented local chefs who each had a sous chef were taking part in the Chef Challenge for local bragging rights, fun, and to entertain shoppers. (The Chef Challenge is an annual event at the Woodstock Farm Festival market).

The chefs were given 15 minutes to spend $50 at the farmers' market for food that would used in their dishes. Categories to be judged: most creative, most economical, best use of market ingredients, favorite dish among the judges, easiest, and most family friendly. The recipes and dishes will be posted on Woodstock Farm Festival’s Facebook Page soon. More photos of the Chef Challenge can be viewed at the Hudson Valley Good Stuff Facebook Page, which I invite you to Like too!

It is always fun to eavesdrop on on-lookers who have judging-envy. “Who are the judges?” asked one woman to her friend. “Oh, I don’t know,” she answered. “I guess you have to have connections,” grumbled the friend. Well, the expert judges were: Eve Fox of Garden of Eating, Kathleen Reynolds of Edible Hudson Valley, and Michael Rosario of Gigi’s Trattoria in Rhinebeck. As the dishes were being plated, and then served to the judges at their table, people swarmed around the table, commenting and drooling over the food. Reynolds and Fox dealt with this with good humor, but remained focused on the task at hand. Rosario, the Robert Downey Jr. look-a-like, blocked out the distractions and concentrated on the food.

Around 7pm Reynolds and Fox shared their thoughts and admiration of the food with the chefs and the remaining viewers. I didn’t stay for the entire speech, but it was more of a foodie conversation than a declaration of winners. Winners will be listed on the Woodstock Farm Festival Page. Were you there? What did you think? What is your favorite local chef/cuisine challenge? I’d love to be a judge again!