How to Get a Hug from Marina Ambromovic | Daily Dose

How to Get a Hug from Marina Ambromovic 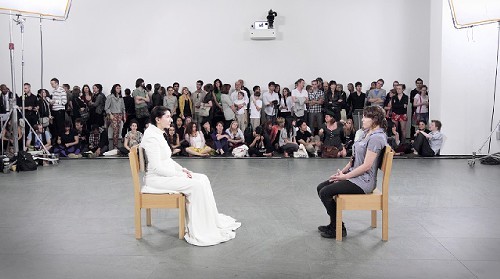 Over 40 years ago, Marina Ambromovic was largely responsible for the birth of performance art. Now, as she looks to open an institute to nurture her medium, she's used the fundraising process as a jumping off point for her newest project. Each and every donor who gives $1 or more on Kickstarter over the next 17 days will receive a hug from the artist. The hugs will take place during two sessions, one in New York City and one in Europe, and comprise "The Embrace," Ambromovic's latest art project.

Ambromovic, who was born in Yugoslavia and is now based in New York City, has been engaged in performance art for over 40 years. Early in her career, Ambromovic's performances leaned toward violent presentations, where she stretched the limits of her ability to remain conscious. These were always relatively short, around the length of a standard theater performance, largely because until Ambromovic was 29, her mother insisted that she be home by 10 at night.

Long since liberated from her mother, Ambromovic's recent performances have been much longer and more interested in exploring the idea of human contact. In 2010, she sat at a table with two chairs, inviting guests at the Museum of Modern Art to share a moment in her presence. The show went on for 736 hours and 30 minutes. Her latest project, "Embrace," is illustrative of Ambromovic's interest in human contact.

Now the artist is opening the Marina Ambromovic Institute in Hudson as soon as funding allows it. The venue is specifically geared towards fostering long durational works, similar to what Ambromovic has engaged in in recent years. This category of work includes not only performance art but musical pieces, theater, political protest, science, and whatever else opens up in the future.

Click here to visit the Marina Ambromovic Institute donation page on Kickstarter and become qualified for a hug from the artist.