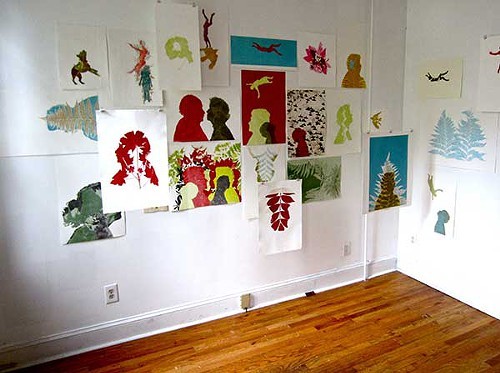 Have you been up to Abeel Street in Kingston on first Saturdays lately? No? Well, then this bit of writing is for you. Yes? Then you know about KMOCA (Kingston Museum of Contemporary Art) and One Mile Gallery and how those two galleries regularly show some of the best art you’ll see in the Hudson Valley. So, let me be your company back to Abeel Street.

As far as galleries on Abeel Street showing great work goes, I’m a bit of a partisan, for I usually enjoy the work both galleries show. In fact, for the sake of full disclosure, I will be showing my paintings and installations at KMOCA this coming fall. But the thing that should put Abeel Street on the art map is not just that there happen to be two galleries just a shot down the road from each other, that they show great work, and that I happen to enjoy the work on view—it is rather that those two galleries foster the kind of cooperation and conversation about art that I’d like to see more often. And they do that by one single, simple move: They stack their openings on top of each other. KMOCA hosts its Saturday openings from 5-7pm; One Mile hosts its openings from 6-8pm. So you head over to KMOCA, look at the work, chat with friends, and then after you’ve made new friends, you head down to One Mile and carry over everything you’ve seen there to here. And vice versa.

Art lovers, friends of the galleries, and interested visitors in the Hudson Valley tend to see a lot of their art at show openings. Wine, beer, and small food pickings lubricate conversation about art inside the gallery and art out in the world. Sometimes—on Abeel Street, between those two galleries, always—you’ll get some conversation about art that will turn on how some work at this one gallery has a lovely complement in the other and, for a moment or two, your world might just expand—feel wider and more full of possibilities.

I’ve often stopped by KMOCA’s Saturday openings and have picked up this conversation with this friend and another and, thanks to the stacked openings, I’ve often found those same friends at One Mile and have picked up our conversation just where we left it. And seeing that friend again in a different place on the same night, I've had the opportunity to find out things I missed my first time out earlier in the evening, in just the way you learn more about a book by returning to it after putting it down for a few beats.

This move, this stacked opening, works to the advantage of both visitors and the galleries. Everyone gets to see all the art they want to see, they get to have all the conversation they need to have and both galleries are made the better, for they never need to undercut each other for visitors. Each gallery, by spreading the word about the other, gets in its corner new visitors and new friends. I'm sure you'll forgive me for thinking this kind of thing doesn't happen in Chelsea.

Kingston is well known for its uptown scene by Wall Street. In just a few months the O+ Festival will bring along a rush of art (and music and camaraderie), and will put forth an important argument for the urgent need for exchange-based collaborative communities. I want to tell you that in another way, a smaller way, the same kind of collaboration and exchange is happening down the road by the river and around the corner at Abeel Street. Come by and check it out.

This past Saturday opening, I saw KMOCA's show of a trio of artists who are interested in impermanence. Suzy Sureck’s charcoal drawings riff on the explosive and altogether quiet end of life. Rebecca Zilinski’s encaustic drawings are architectural doodles caked in wax and you‘ll want to carve into them—they are like wax tablets found at some museum, pointing to the foundations of some landscape you wish you could see. Suzanne Stoke’s paper, print, and drawing installation comes off the wall and tells you of the trips you’ll soon need to take. Then I drove a bit down the road to One Mile’s fun "Mythical Beasts" show and tried to see how many Yetis I could count off. For my money and time, the carved plexi piece depicting a Leviathan octopus’s all-crushing embrace of a frigate was brilliant. I looked at it for a good five minutes; it's the end of the world as those in the ship know it. I could use another look. On my drive home, I wondered what there was between the two shows that I might use to draw together a world that coheres a bit better, even if it that world is impermanent. 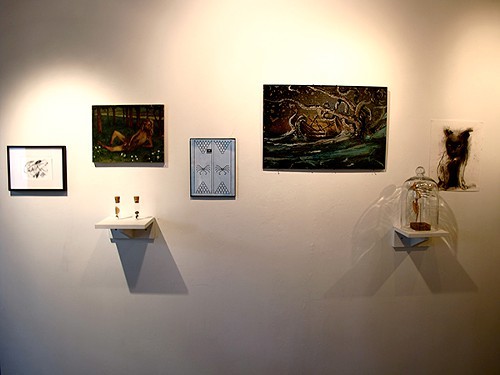