Top Five on Friday: Things to Do Before Summer Ends | Daily Dose

Top Five on Friday: Things to Do Before Summer Ends 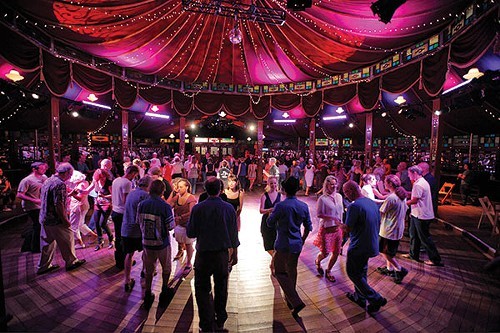 July 26. We're five weeks into summer, and there's about eight weeks left until the first day of autumn. The chill that came on the heels of last week's big heat wave may have sparked some early warm-and-fuzzy feelings for the approaching fall—arguably the most beautiful season in this area. But let's not get ahead of ourselves. There's still plenty of summer left, and plenty of things that you won't be able to do once the cooler weather sets in. Here are our top five picks for things to do before summer ends.

1. Hudson Valley Shakespeare Festival
Whether you're a Shakespeare scholar or you've never read a line by the Bard in your life, a show by the Hudson Valley Shakespeare Festival is a not-to-be-missed summer event. The ensemble of top-notch Shakespearean actors presents three plays in repertory through September 1. The 2013 season includes "King Lear," "All's Well that Ends Well," and an adaptation of Alexandre Dumas's novel The Three Musketeers. The HVSF's outdoor theater—a large, airy, yet intimate tent on Boscobel's lawn—has ceilings, but no walls. "The people in the first row have their seats on the stage—on the same ground that the actors are on, and the same ground that goes out into the horizon," says Terrence O'Brien, founding artistic director of the HVSF. Actors regularly enter and exit through the backdrop that opens out to the Hudson Highlands at the edge of Boscobel's green lawn in the distance, turning the dramatic Hudson Valley landscape into a set piece all its own. Arrive early on the day of the performance and have a pre-show picnic in Boscobel's gardens or on the lawn overlooking the Hudson. The view is as epic as Shakespeare's dramas.

2. Beach
Go to one. Spend the day or the weekend. Jump into the salty water even if it's cold. Bury your toes in sand. Drink frozen daiquiris with little umbrellas or cheap beer out of the can. Take a load off. Even though Chronogram is a regional publication, there's no denying that Hudson Valley residents leave the area every now and again, especially for a little R&R. Try a beach that's not too far away for optimal time oceanside. Vanessa Geneva Ahern of Hudson Valley Good Stuff recommends Long Beach in Noyack. "For non-residents the daily parking permit is $20 compared to $40 at Cooper's Beach in Southampton," Ahern says. "Other pros: Peace and quiet, the bay is very calm and perfect if you want to get a swim workout in, there are lifeguards, and the entry fee is waived for bicyclists." If you can't take the time for an ocean vacation, try tubing down the Esopus Creek, or take the family for a day-trip to a local water park, like Splash Down in Fishkill.

3. Music Festival
The season of the summer music festival will end soon, but for now it's still kicking. Even if mega-music festivals aren't your thing, it's fun to experience one every now and again—even if just as a kind of experiment in human behavior. Ideally, though, the music will be an experience of its own. Luckily, music festivals in the Hudson Valley cover a wide-range of styles and genres, offering something for everyone's taste. Tanglewood's summer season continues through September 1, with a performance by the young jazz bassist and singer Esperanza Spalding on August 4. The Hudson Valley Jazz Festival runs from August 8 through 11 in Orange County, featuring performances by saxophonist Dave Liebman and guitarist John Abercrombie with drummer Adam Nussbaum, bassist Steve Swallow, and saxophonist Ohad Taylor. Listen to some guitar picking at the Falcon Ridge Folk Festival in the Berkshires from August 2 to 4, or some indie rock at the Hudson Music Festival from August 9 through 11. The Hudson Valley even offers a festival for classical music lovers: Catskill High Peaks. This end-of-summer classical series takes place at the Clermont State Historic Site and venues in Hunter, Catskill, and Tannersville.

4. Bard Spiegeltent
It's not summer in the Hudson Valley without a visit to Bard's authentic Belgian-style tent of mirrors. The Spiegeltent has been hosting summer entertainment since 2006, when its introduction to Bard marked the first time one of these fabled, old-world structures appeared in America. The wooden floors, mirrored walls, stained-glass windows, and red velvet ceiling create a magical, carnivalesque atmosphere for cutting-edge cabaret and musical performances. Conveniently situated near the Frank Gehry-designed Fisher Center, the Spiegeltent is the perfect spot to go for pre- or post-show dinner and drinks—but it also offers an exciting line up of its own shows. This summer, catch one of the performances by the Hudson-based Bindlestiff Family Cirkus, or midsummer dancing on a Sunday evening, including swing dancing with Got2Lindy and the band Eight to the Bear on August 11.

5. Al Fresco Party
Drape strands of white lights around your porch or deck; light some tiki torches to keep the bugs away; put on your favorite playlist; make a big punch bowl of sangria; and invite your favorite people over. There's nothing quite like a party outside on a long summer night, when the glow of the day seems endless. If you have the means, build a fire when it gets dark, and surprise everyone with a tasty late-night snack. Keep it easy, light, and fun—we don't spend nearly enough time kicking back with the people we love. (Check out some more outdoor party tips here, and view a couple classic sangria recipes here.)