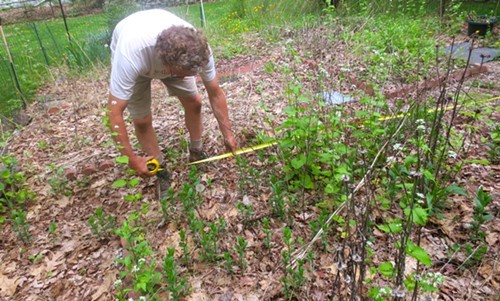 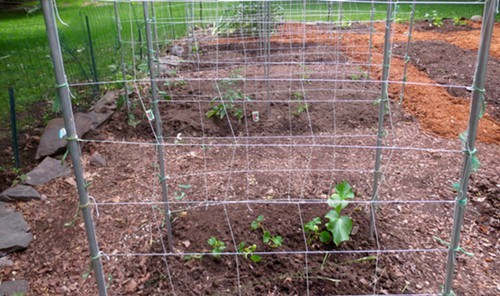 Every time I look outside my window to see my garden, I feel optimistic. As a gardening friend of mine says, "Looking at a garden organizes your mind." It took me seven years of living in the Hudson Valley to begin to take my garden seriously. When we moved to Woodstock in June 2003, our garden had mostly overgrown weeds and mint in it. (I remember being really proud of that mint and having fun putting it in my iced tea.) The garden stayed that way until last year when a friend of mine helped me set up the garden and mix the compost in with the dirt, and plant vegetables that I bought from Gallo's Nursery andAdams Fairacre Farms. My gardening friend moved to Mississippi last year so I had to either try to wing it on my own with my black thumb, or find a gardener who could work with me and my budget.

Enter Jay Levine of Hudson Valley Backyard Farm who I met at a Wellness Wednesday at Mother Earth's Storehouse in Kingston. I invited him to my backyard to give me a consultation, an estimate, and a proposal for a gardening re-design. (He sent me the proposal by email the following week.) Jay Levine has a Masters in Sustainable Landscape Planning and Design, worked as an urban planner and science teacher before starting his own gardening business, Hudson Valley Backyard Farm Company. I can tell just by watching him in action, studying every weed and shadow in the garden, that it is his passion. You could call him a walking gardening Wikipedia. (He started gardening as a 6 year old!)

I gave him a brief history of last year's crops: lots of tomatoes and lettuce until an animal came in and went on a binge one night. I had a bounty crop of cucumbers last year. "Oh, really? What did you use to hold the cucumbers up?" Levine asks me. "Uh, nothing. I didn't know any better so I just grabbed them from the ground," I told him. Aghast and mildly amused, Jay suggested building trellises to help the tomatoes grow and keep the cucumbers off the ground.

He asked me if I was attached to anything that was growing wild in my garden, for example the invasive exotic plant, a multi-flora rose shrub which I called the rose bush. He asked me if I was okay with re-organizing the layout of the garden, and removing the bricks that outlined the garden beds. Then he suggested that I remove the mint if I wasn't attached to it. At first, my husband and I were a bit ambitious about building a sturdy 10-foot fence to keep the deer out, and I was open to an irrigation system. Jay sent us a detailed diagram, and an estimated cost of labor and equipment.

After seeing how much the fencing and irrigation system was going to cost in terms of materials and labor cost, we decided to forgo the fancy deer fence and irrigation system, and asked Jay to instead install the trellises, add the mulch, prepare the beds, and plant the seeds and vegetable plants. Jay was agreeable to that, and reduced the estimate accordingly and offered a few budget-friendly suggestions for a DIY fence (chicken wire and metal posts), and suggested we get soaker hoses in place of an irrigation system. The total labor cost (not including materials) was $700, and a good part of that was barter for sponsoring my blog. (Thank you, Jay!)

Jay Levine gave us a shopping list, which included conduit, rebar, netting, and galvanized plumbing tees for the trellises. We really didn't know what to expect, and my husband has an aversion to shopping for hardware supplies, but this was the only challenging aspect of the garden re-design for us. (The previous year, I just bought a few tomato cages. As you can see from the before and after garden photos, the trellises look beautiful!) It took Jay Levine a few long afternoons to create and re-organize our garden. He is confident that the trellises will last a decade. I did a bit of initial weeding before he started, but my weeding was pretty minimal. I would definitely recommend Hudson Valley Backyard Farm if you are in need of a gardening expert consultation, need help starting your own garden, or just landscaping and gardening work. Jay Levine is very knowledgeable about all aspects of gardening, and is the real McCoy! "Mulch is to a garden what a fresh coat of paint is to a room," says Jay.

Vanessa Ahern is the founder of Hudson Valley Good Stuff, a blog about where to eat, play, and recharge your spirit in the Hudson Valley.