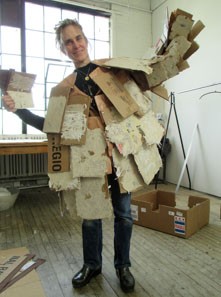 Rosendale's Widow Jane Mine has something of a strange history. According to the Century House Historical Society, the mine's current caretakers, limestone suitable for cement was first found in Rosendale by a man named Andrew J. Snyder in 1825. For the next 145 years, cement from the mine would play a major role in paving the greater New York area, from the D&H Canal to the pedestal of Lady Liberty. Only in 1970 did Andrew J. Snyder II finally shutter its doors.

Somewhere along the way, however, Widow Jane took on additional uses. First, it was a mushroom farm operated by a man dubbed the "King of Mushrooms." Then, as the Cold War progressed, the mine changed yet again to become part top secret government document storage center and part luxury Cold War-era bomb shelter.

The mine's colorful history is being presented in what promises to be an equally colorful fashion on July 28 in a performance by Hudson Valley-area artists Mau Schoettle and Kate Hamilton called "Dada Spill."

The performance on the night of July 28, taking place inside the mine itself, will be the product of years of imagining on the parts of Schoettle and Hamilton. In their words, the production is an attempt to bridge the mine's "unique dream-like environment" with "the truth of its hard history." In attempting to do so, the creators will examine the seemingly mundane concept of data storage in a cross-discipline and multimedia manner made up of a multimedia presentation and a series of theatrical vignettes. Sampling two scenes from the play "WRENCH" by Elana Greenfield along the way, the presentation will incorporate many simultaneous images and sounds, resulting in a "data overload."

And this will only be the opening salvo—according to the creators, "Dada Spill" will be the first of several productions comprising the larger "Mine Project." In the process, the creators have undergone a refitting of their own, shifting from the world of art and design that both Schoettle and Hamilton have inhabited throughout their careers to the world of avant-garde theater.

The production's title, "Dada Spill," is a play on the mine's Cold War past and the performance's absurdist nature in the style of Salvador Dali and the Dada cultural movement. Surely Salvador and the Snyders' alike would be proud.

"Dada Spill" will be performed from 3pm-4:30pm on July 28 in the Widow Jane Mine at the Century House Historical Society in Rosendale. $10 admission. For more information, visit Themineproject-dadaspill.net.