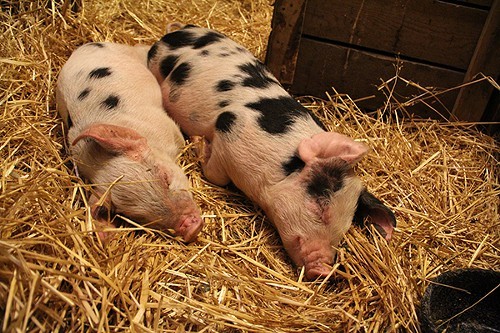 Today, June 19, the Catskill Animal Sanctuary, a refuge for rescued farm animals and horses in Saugerties, will get a special visit from New York City's first all-vegetarian public school. The 50 third graders will get up, close, and personal with the sanctuary's 30 horses, 800-pound pigs, and one of their 2,000-pound steers, Tucker.

Queens-based PS 244, The Active Learning Elementary School, is New York City's first grade school to serve an all-vegetarian menu five days a week. The school feeds nearly 400 students, from pre-kindergarten to third grade. PS 244 incorporates healthy eating and living into its academic curriculum, and the school made the transition to a meat- and fish-free menu as part of a city-wide mission to improve public health.

During their visit to the Catskill Animal Sanctuary, the third graders will have the opportunity to meet some of the 2,500 rescued animals, including three pigs and seven goats that were recently saved from an animal hoarder. CAS will introduce the children to daily farm chores such as feeding the pigs, grooming the horses, and walking the goats around the sanctuary's free-range farm. In addition to spending time with rescued animals, they will also learn about issues that affect farm animals through an observational learning activity called “Just Like Me.” A vegan lunch will be prepared by the sanctuary's chef.

Opened in January 2001, the sanctuary's mission is to rescue and rehabilitate abused farm animals and horses. In addition to emergency rescue services, CAS provides programs that educate the public about the impacts of agribusiness and the cruelty to farm animals that's often a reality of that system. Some of CAS's residents include 500 "broiler" chickens, or chickens who are slaughtered at six-weeks old for food. The CAS's animals have been rescued from mailboxes, dumpsters, and on the shoulder of the Thruway. The sanctuary's 100-acre property in Saugerties is maintained through donations and visits from the public.