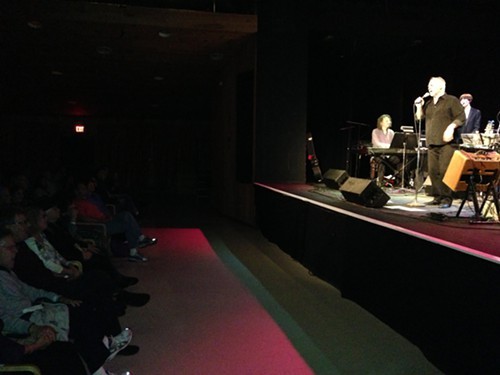 I really enjoyed seeing Robbie Dupree perform live at the Bearsville Theater in Woodstock last Saturday night, May 11. After seeing Todd Rundgren perform the previous week with a day glow laser light show and iPads, I can say that it was a totally different musical experience. Dupree may be best known for his Summer of 1980 hit single, Steal Away but if you spend 90 minutes listening to his live show, with his fierce harmonica playing, you realize he is a lot more than Steal Away. Everyone in the audience still gets charged up when they hear Dupree sing that classic yacht rock song, though. Unlike many singers his age, in my opinion, Dupree sounds exactly the same as he did back in 1980. What do you think?

Dupree told the audience that he'd be singing songs from Time and Tide (2010) and Arc of Romance (2012), as well as songs from his earlier records for people who have followed his music throughout the years. He performed "Hot Rod Hearts," "Miracle Mile," "Lucky," "Salvation," and "Mystery World." "Blue Monday" and "We Let the Stars Go" were a few of my favorites. For his encore, he dedicated a song "In God's Country" to his friend musician Larry Hoppen who passed away last year.

Hudson Valley Good Stuff is a 4-year old blog about where to eat, play, and recharge your spirit in the Hudson Valley. Find more clips from local concerts at the HVGood Stuff YouTube channel.