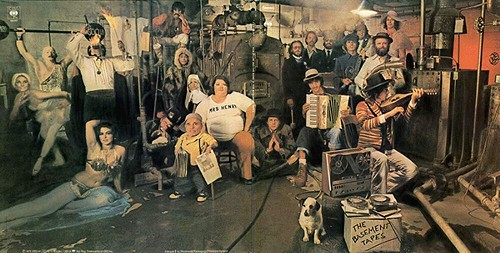 In honor of the internationally recognized Record Store Day, which kicks off tomorrow morning bright and early with exclusive releases and major bargains at independent music shops around the world, we've compiled our list of the top five albums recorded in the Hudson Valley. Whittling it down to our top five was tough, so we have an extended list with our top ten—and some runners up—here.

1. The Basement Tapes—Dylan and The Band
Woodstock, various locations
While the rest of rock and roll was looking forward in 1967, Bob Dylan and The Band were mining the well of strangeness that Greil Marcus terms "old, weird America." Dylan had just crashed his motorcycle, and the backing band from his last tour, the Hawks, consisting of four Canadians (Robbie Robertson, Richard Manuel, Rick Danko, and Garth Hudson), and one Arkansas shitkicker (Levon Helm), gathered around in Woodstock as he convalesced. Just as Dylan turned his back on twee coffeehouse folk music when he plugged in at Newport Folk Fest in 1965, the hundred or so songs that Dylan and the Band recorded in what came to be known as The Basement Tapes (not officially released until 1975) were another turn for Dylan, this time toward an intimate, rootsy sound that prefigured the Americana genre.

But it's the strangeness that gets you. The evocation of Appalachian melancholic oddity as in the traditional "Coo-Coo Bird": "I'd rather be in some dark holler / where the sun refused to shine." God and Satan and Puritans and drunkards and grave robbers and tricksters and nonsense lyrics and Judgment Day all rolled into one. What a strange and beautiful mess it is, this America, it seems to say.

2. Cosmic Thing—B-52s
Dreamland Recording Studio, West Hurley
The B-52s formed in 1978 after sharing a tropical Flaming Volcano drink at a Chinese restaurant. Such a genesis is indicative of the style they'd come to be defined by: surf-rock-inspired party music that celebrates spontaneity and the wild impulses of the young and in love. Taking the New Wave movement of their generation and sun bleaching it, they set the trend for the laid back thrift-store style of the lost-in-time American surf culture. Their fifth studio album, Cosmic Thing, represents a darker side to their signature good-vibes, as it's their comeback album after the death of guitarist and original member Ricky Wilson in 1985. Overcoming doubts about the band's future, 1989's Cosmic Thing introduced the iconic track "Love Shack" to the world, and brought the B-52's back into the mainstream after a period of stagnation—a testament to their carefree ethos despite a devastating loss.

3. Grace—Jeff Buckley
Bearsville Recording Studio, Woodstock
Jeff Buckley recorded what would be his only studio album in the Hudson Valley. Grace, which showcases Buckley's vocal range and stylistic variation on guitar, was initially met with poor reception, but now commonly ranks as one of the best albums of all time. This could be in part because of the young artist's untimely death—in the midst of recording what would be his second album—or his hauntingly somber cover of Leonard Cohen's "Hallelujah," which still stands as the best-known version of the song (despite the legendary original songwriter, or reproductions by such powerhouses as John Cale and Rufus Wainwright), achieving a nearly ubiquitous presence on the soundtracks of modern teenage television soap-dramas. In any case, Grace remains one of the most significant albums of the 20th century, haunted by the abrupt cutting-off of the young artist's potential.

4. Deserter's Songs—Mercury Rev
NRS Recording Studio, Catskill
In some ways, the Kingston-based Mercury Rev can be thought of as spiritual heirs to The Band (a point made by many critics). This was never more apparent than on the band's fourth album, released in 1998. The songs were conceived by recent transplants to the Catskill Mountains by Jonathan Donahue and guitarist Sean "Grasshopper" Mackiowiack, and some make explicit reference to the region, like "Opus 40" (with Levon Helm sitting in on drums) and "Hudson Line" (Garth Hudson on sax). But the true lineage is again to that lost map of America that The Band set off to find in their music. Mercury Rev went about differently, sure, with chamber pop pretension and Donahue's airy art rock vocals that were a far cry from The Band's often growling shambolic mess. But the stab at transcendence through calculated strangeness—the grab at the unspoken myth that lurks at the heart of this country—was the same. Deserter's Songs is all the proof you need that we do weird well in the Hudson Valley.

5. Green—R.E.M
Bearsville Studios, Bearsville
Though the '90s alternative rock group's earlier guitar-driven albums are masterpieces in their own right, there's something about R.E.M's acoustic songs that drive right to your core, with Michael Stipe's full and softly wavering voice front and center, like a pot of water just starting to boil. Green represents a departure from their traditional folk-rock style and a movement into the acoustic approach that would influence their two subsequent albums. Partially recorded near the idyllic natural setting of Woodstock, Green also marks a development in the band's political engagements, conceptually influenced by environmentalism and green politics. The album's division into two thematically distinct parts—the "Air side" and the "Metal side"—points to an experimentation with style that the band first started exploring in Green.

Click here to see our complete list of the most important albums recorded in the Hudson Valley, and listen to some of the hits that came from them.