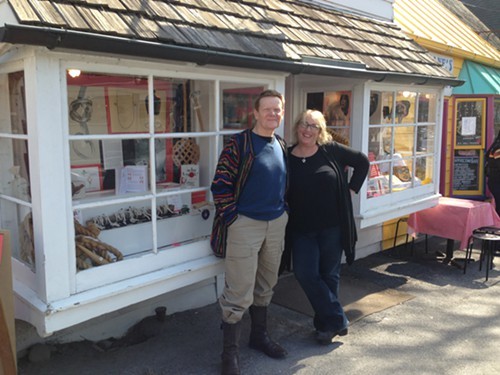 The 4th Annual Woodstock Writers Festival will take place from April 18 through the 21, and Martha Frankel, its executive director, is breathless, busy, and glowing. When I ask her what is the greatest challenge with the Woodstock Writers Festival, she shrugs and smiles at me. "I don't know. I'm in such a good mood today!" Since I moved to Woodstock in 2003, I have known about celebrity writer and author Martha Frankel, and have seen her around town at Bread Alone and other restaurants, and followed her feed on Twitter, but it feels satisfying to finally sit down and meet her in person at Joshua's Cafe in Woodstock on a Sunday afternoon to talk about the WWF.

I'm also excited because I'm going to meet Philippe Petit, the French tight-rope walker, who famously went for a high-wire walk between the Twin Towers of the World Trade Center on August 7, 1974. (In the documentary Man on Wire, Petit recounts his impossible coup. I have wanted to meet him since finding out that he lives in the area, and then seeing Man on Wire). The movie will inspire and amaze you. I highly recommend it. Petit is going to be discussing his soon-to-be released book Why Knot? at the WWF, teaching festival go-ers how to tie knots.

"I’m thrilled about Philippe!" says Frankel. When she found out that her friend Philippe Petit was coming out with a book (Why Knot?) on April 17, she asked him if he would like to be the opening keynote speaker for the festival. He said yes, but insisted that Martha Frankel be his conversation moderator. "He doesn't need me. He is so charismatic! His new book is about knots, but it is about knots like Moby Dick is about fishing, you know. It is more than that. He is going to be teaching people how to tie knots, and our joke is that I wear sneakers with no laces, and boots that have zippers on them. Philippe swears that by the end of the night, I will be able to tie my shoelaces," says Frankel.

For the first time, the Woodstock Writers Festival will be available via webcasting this year, so you can attend virtually from anywhere in the world. The roster of speakers has shrunk from the 52 writers of last year, and this pleases Frankel. "One of the things we are learning is how many people we can actually have. This year we have 36. That is a nice number," says Frankel, who directs the coordination of guest lodging and dining.

I ask her "What don't people know about the WWF?"

"That it is for readers. It is not for writers. If I had to do it all over, I would rename it the Woodstock Readers Festival. People say to me sometimes, 'I’m not coming, I’m not a writer.' If you’re a reader, and almost everybody is, you'll get to meet an author that wrote a book that changed your life at a lecture. We are also having these cocktail parties (at Photosensualis Art Gallery) on Friday and Saturday that you can buy tickets to," says Frankel.

What else should readers (and writers) check out? There will be writing workshops which will tend to sell out quickly that are taking place at beautiful homes in the Woodstock area thanks to residents graciously offering their homes for this occasion. There will be exciting new panels including a comedy panel, ("Funny Thing Happened on the Way to Woodstock") with staff writers from "Letterman", "The Colbert Show", "The Daily Show with Jon Stewart", and "Late Night with Jimmy Fallon" discussing comedy writing from 2-3:30pm on Saturday, April 20. "The best comedy happening right now is happening at 11:30pm,"says Frankel.

There is a spirituality panel with Elizabeth Lesser, Lodro Rinzler, and Meggan Watterson discussing spiritual writing and consciousness. The Memoir-a-Go-Go panel, which I always look forward to, will have Andre Dubus III, Christa Parravani, and James Lasdun. Cheryl Strayed, author of the memoir Wild, which was Oprah's 2.0 pick, and Tiny Beautiful Things, will be talking with WAMC's Joe Donahue on April 20 at 7:30pm. Priscilla Gilman, author of The Anti-Romantic Child and former poetry professor at Yale and Vassar will be moderating the Poetry Panel with Eamon Grennan and Maureen N. McLane at 4pm on April 20.

After I finished my interview at Joshua's Cafe in Woodstock, Frankel and I left to meet Philippe Petit at The Golden Notebookbookstore at 3:30pm. (Petit is very punctual, and has an extraordinary attention to detail as you can imagine!) He was at The Golden Notebook at 3:30pm sharp. I was a bit starstruck when I met him. As Frankel says about being his friend, "Just thinking that he is the man who did THAT!" It just blows my mind. I had to get over my jitters for the photo opportunity. Petit wanted to make sure I had the optimal lighting for my photos, and studied me carefully as I fumbled with my iPhone and camera. (I hope he is satisfied with the photos.)

I can't wait to see him give the keynote presentation at the Woodstock Writers Festival on Friday, April 19 at Kleinert/James Center for the Arts. Tickets are still available at this time. Visit WoodstockWriters.com to see the entire schedule of events, buy tickets, and purchase your webcasting picks. Happy reading, writing, and revelry as the Woodstock Writers Festival slogan goes!