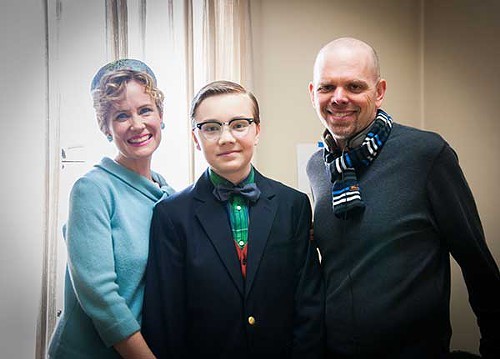 On the same day that the delightfully sinful 1960s period piece, "Mad Men", premieres its sixth and penultimate season, a new series presenting a different side of the turbulent decade will premiere its first episode. Don't expect to find many mid-day martinis with olives or inter-office affairs with secretaries aspiring to be models. "Granite Flats", produced by BYUtv (Brigham Young University's broadcasting network), will present the family-friendly version of the '60s.

BYU's Broadcasting mission statement isn't one you normally associate with the goals of 21st-century television and media. The organization, it says, "inspires people to see, do, and be the good in the world by providing uplifting content, magnifying the university, engaging like-minded communities, and elevating ideals into action." So, while the show's raison d'être isn't necessarily to promulgate the spiritual leanings of Brigham Young University (the largest religious university in the country), it is operating on a certain worldview—that is, with an eye toward wholesomeness and family-friendly content in an increasingly graphic television age.

Watching the trailer for "Granite Flats," though, makes it clear that this isn't a program designed specifically for children. Set in a rural Colorado military-base town during the early 1960s, in the midst of the weeks of the Cuban missile crisis, the show presents sophisticated historical, social, and political issues. The turmoil seething beneath the surface of a Truman Show-esque utopic neighborhood comes to a climactic point in the form of an explosion at an army base, and fears of a Soviet attack or government conspiracy infect the town. The friendly neighborhood suddenly swarms with G-men and covert activity, and the intense secrecy provokes local citizens and police to get involved.

This is the state that recently widowed Beth Milligan and her son Arthur confront upon moving to Granite Flats, and as a nurse and student, they take us deeper into the suspect institutions of the hospital and the classroom. The role of family in "Granite Flats" extends beyond the show's fictions, though. Maia Guest, the actress who plays Dr. Susan Andrews, is married to the show's writer, John Plummer; and their son, Charlie Plummer ("Boardwalk Empire") also plays a prominent role as Timmy Sanders, a boy who befriends Arthur Milligan (Jonathan Morgan Heit). The Plummer family, hailing from Cold Spring, didn't intend to work on the show together. After John Plummer wrote the pilot, they had trouble casting one of the four adolescent kids who star in the show. Charlie Plummer, already an established actor, did a blind reading for the part so that no one would know he was John's son, and they loved him. While filming on set in Utah, Charlie was accompanied by his mother, Guest. When they needed to cast an additional role for the part of a nuclear physicist, Guest, an actress and daughter of a nuclear physicist, was able to bring an authentic background to the role.

Though they all came into the show in their own qualified ways, the Plummer family of Cold Spring injects some real familial bonds into a program whose scope and reach are centered on such values. "Granite Flats" premieres today, April 7, on BYUtv. All episodes will also stream on BYUtv.org.