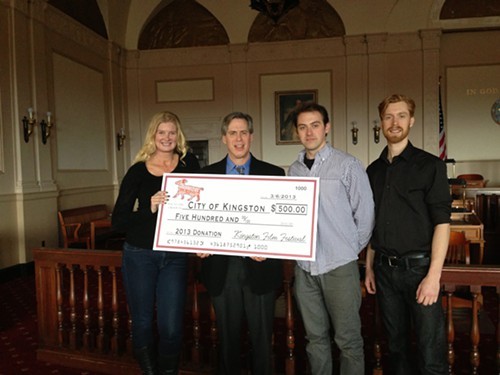 "Oh, if I could find an investor, I'd love to see TechCity turned into a studio," says Cybele, who is skilled at finding investors and grant writing. (She is a multitasking event organizer and also organizes the San Diego Film Festival.) Sometimes investors find her. Ric Dragon, president and owner of DragonSearch Marketing in Kingston, met Cybele last year during the first festival. This year, Cybele says that Ric Dragon was very eager and enthusiastic about becoming a sponsor. DragonSearch Marketing is the Kingston Film Festival's main presenting sponsor.

I e-mailed social media guru Ric Dragon to find out what the impetus was. He replied: "Uptown Kingston is going through an amazing revival. If you haven’t noticed, it’s become a hub of culture, entertainment, night life, and rich living. The Kingston Film Festival is a natural extension of this renaissance, amplifying the already burgeoning film industry in the Hudson Valley. The whole team at DragonSearch is proud to be sponsoring the event and be a part of it in this nascent stage. Many of our colleagues live here in Kingston, and even for those that don’t, we all spend a lot of our time here. We’re invested both financially and emotionally in this community. Besides, who doesn’t love a good movie?"

Cybele has a strong love of shorts, and her message to shorts filmmakers is "Submit! Submit! Submit!" The Academy of Motion Pictures is relying more and more on independent film festivals to discover Oscar-worthy shorts. Cybele's goal is to have the Kingston Film Festival become one of the Academy Awards qualifying Independent Film Festivals. The Kingston Film Festival plans on developing a rapport with the academy by showing a strong body of work. The festival also intends on creating an archival system of all films being screened so the film treasures will not fall into the abyss.

One of the coolest things the Kingston Film Festival is doing is giving back to the Kingston community. Today I joined Astrid Cybele, Trevor Dunworth, and Dan Votke of BSP for a photo opportunity and meeting with the City of Kingston Mayor, Shayne Gallo, at City Hall in Kingston.

Cybele did tell me about a few potential Hollywood and music world big shots who may be part of the Kingston Film Festival in August 2013, but I have been sworn to secrecy until the line up is confirmed. Stay tuned!