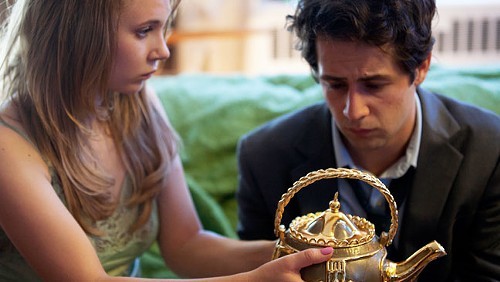 A broke couple in their 20s visit a roadside antique shop in a rural New York town, and discover a hidden gem that will change their lives. If this scenario, which is the premise of the feature film The Brass Teapot, sounds familiar as a resident of the Hudson Valley, that's no coincidence. As the trailer reveals with its familiar shots of Uptown Kingston, the Poughkeepsie Galleria, and the Toll Brothers' Harding Country Manor Model in Fishkill, the film was shot in the Hudson Valley. Production took place in Beacon, Newburgh, Kingston, and several other regional towns, with help from the Hudson Valley Film Commission, during the summer of 2011. The Brass Teapot was the first film to use Umbra of Newburgh soundstages, a film production facility devoted to projects in the Hudson Valley.

Today, the Brass Teapot is available for digital download on iTunes or on demand. The magical dark comedy hits theaters on April 5, but there will be two Hudson Valley premiere's before then, one at The Beacon Theatre on March 22 and the other at the Downing Film Center in Newburgh on March 23, both at 8pm. The Newburgh screening includes a wine and cheese reception.