Bloodlust of the Druid Overlords 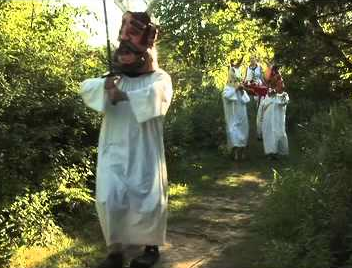 When I first encountered the work of Michael X. Rose in 2009, I was perplexed and enthralled. I commented at the time, "When encountering the odd, beasty-filled folk-arty paintings of Michael X. Rose, sublime is not the first word that comes to mind. In fact, a reasonable reaction to the man-eating dinosaurs, menacing ghosts, and nude women beset by crawly sea creatures might be: How on earth did this guy get a gallery show?"

And now, he's made a film, Bloodlust of the Druid Overlords. How on earth did this guy get the resources to make a film about virgin sacrifices, a swashbuckling St. Patrick, and pagan Ireland? However he did it, Rose is screening his film on Saturday night as part of a KMOCA-sponsored show at the Celebration Chapel around the corner from the gallery. The evening also includes live music and performances by Ryder & Hazel and Sweetbryar.

We're big fans or Rose's work here at Chronogram, and I have no doubt that the film will be as interesting and disturbing as Rose's paintings.

Full info about the evening's festivities at KMOCA's Facebook page.