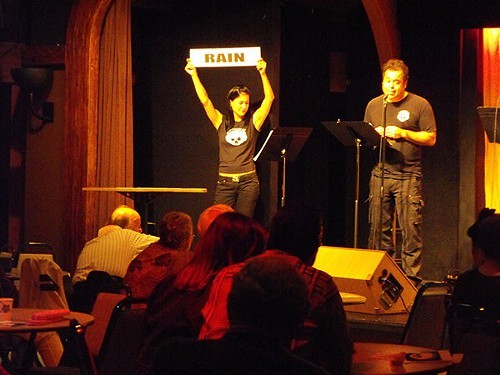 “The Eight: Reindeer Monologues” is a dark Christmas comedy about sexual abuse. Written by Jeff Goode, the reindeer reveal, through monologues, that Santa is guilty of sexually harassing one of them. “It's a very, very funny political satire,” says Paul Ellis, writer and director of Air Pirates Radio. It's also one of the reasons why his company of seven years is looking for a new performance space.

Air Pirates Radio, a company that performs live recordings of radio broadcasts with audience-generated sound effects, decided to put on what Ellis calls the “slightly irreverent comic play” at the newly renovated Sugar Loaf Performing Arts Center. “The basic political line,” Ellis explains, “is that with people in power—the president of the United States, the coach of the Penn State-football team—the victim is not protected. If it's the right person doing the molesting, people never believe the victim.”

Before the show's performance dates on December 21 and 22, the SLPAC's Board of Directors decided they would not sponsor the show because some members felt the material was offensive. “After reading the script and obtaining information about some other productions of the play,” says Bill Sunkel, board secretary, “a concern was expressed by some board members that the 'Reindeer Monologues' wasn't of a quality or a content that the center felt comfortable presenting as its own product.” A deal was struck between the board and Ellis that Ellis could produce the show if he paid rent to the theater. Ellis, who already worked off-salary as volunteer executive director of SLPAC along with his staff-in-training—two young women, one 19 and one 22—agreed. “I paid for royalties; I paid for scripts; I paid for costumes; I paid for the rent and did the show anyway—and the show sold like crazy,” says Ellis.

Now in the hands of Ellis's independent production company, Loose Cannon, it was agreed that none of the proceeds from the show would go to SLPAC. According to Ellis, though, the board “started trying to figure out how they could get the money anyway” by looking for various reasons to charge him, including advertising. Ellis says only a small group within SLPAC were spearheading the opposition. According to Ellis, the board refused to give him funding for a show on New Year's Eve, and on December 31, he resigned. “There was nothing to do but walk away,” Ellis says. “They won't allow me the freedom to create.” Sunkel, speaking on behalf of the board, says, “At this point, and out of consideration for Paul, we're not going to comment any further on his departure except to say that we wish him luck in his future endeavors.” Jim Sandler, who was sitting as board president, also resigned from his position with SLPAC. “There were some people on the board who decided to censor what was being put on,” he says. “I didn't agree with it. Paul didn't agree with it. I don't think that you should censor art—I think it's a bad policy.”