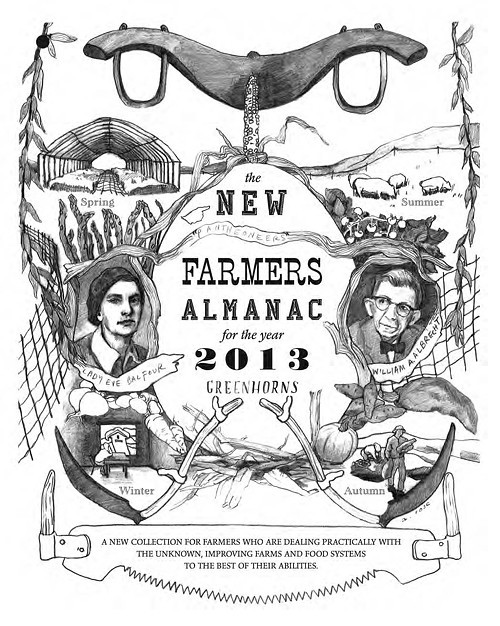 The six-year-old Hudson based nonprofit, the Greenhorns, have published The 2013 New Farmer’s Almanac. The 336 page almanac (with a hole punched in the top so you can hang it in your outhouse) aims to help the future farmer with advice on how to deal with problems like monoculture, population flux, and an increasingly urban society.

Essays, poems, historical excerpts, and illustrations, both contemporary and historical, fill the book. There is also an audio variation of the almanac in podcast form, with interviews, songs, and lectures.

The Greenhorns were founded by Severine von Tscharner Fleming in Berkeley in 2007. Fleming filmed local farmers and she began to grow a following. A loose pack of techies, graphic designers, cartographers, filmmakers, and soil enthusiasts formed. The group relocated to the Hudson Valley in 2008 with the mission to support new young farmers through 21st century technology.

In 2009, the Greenhorns made a documentary on chronicling the lives of the new generation of agrarians. They've also ventured into radio, essay books, and workshops. The almanac went to print last Friday.

To learn more go to thegreenhorns.net.